Sex in the Who Cares City 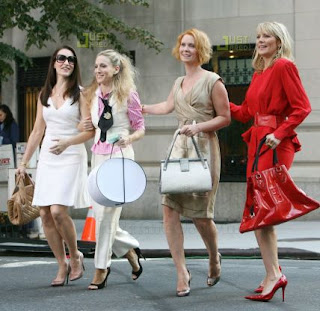 The 'count down' to the movie premiere.

The obsession of the dresses.

Am I the only one who now watches the old episodes cringing? Why did I think these were interesting, much less riveting story lines? All the characters are one demential. The plots are mildly entertaining but seem written mostly to titillate. At the time, it was a bit new to have women characters so up front about sex and relationships. And that was cool. But I resented them all being painted as a shoe slutty man eaters. It gives woman kind a bad name. But fine. The show had its place on the coveted HBO Sunday line up. Especially in my house.

But now it seems the world has missed them SO much. I say- really? Were you gone? Or are we just so hard up for film that we are ready to drudge up a barely old TV show to reclaim it?

SATC- thanks for the memories on the Sunday nights. And for making me occasionally nod in agreement or understanding. But really, I moved on when you did and just can't muster up any enthusiasm for you now. Carrie. Big. Miranda. Charlotte. Samantha. I left you in New York suspended in time and that is actually where I'd like you to stay.
Posted by charming gardener at 21:10

charming gardener
Cambridge, England, United Kingdom
American WI girl goes DC goes UK. Happily wed to my English lad, living on a clean slate of a new career as a life coach and my real job of parenting 2 sweethearts. I am here to live on purpose and to speak my irreverent truth.